Martin Luther King Jr. was deeply influenced by his family and faith.  Both his grandfather (a sharecropper born in 1864 during the Civil War) and father (1897) were pastors in the Baptist church, serving for over six decades collectively.

In his autobiography, Dr. King wrote of his deep admiration for his father and the role he played in shaping his conscience.  Martin Sr., who rose to become head of the NAACP in Atlanta, stressed to his son the need for educated ministers, actively engaged in the pursuit of justice.

Thus, in addition to faith, education was emphasized in the King household.

At the age of fifteen, Martin Jr. graduated from a segregated high school and went on to receive his bachelor’s degree from Morehouse College, where both his father and grandfather graduated.  He then graduated from Crozer Theological Seminary and was elected president of a predominantly white senior class.  With a fellowship won at Crozer, he earned his doctorate at Boston University.

Answering the call to serve like his father and grandfather, Dr. King moved to Montgomery, Alabama to become a pastor. Shortly thereafter, he led a nonviolent bus boycott that lasted 382 days and ended with the Supreme Court of the United States declaring on December 21, 1956 the laws requiring segregation on buses were unconstitutional. 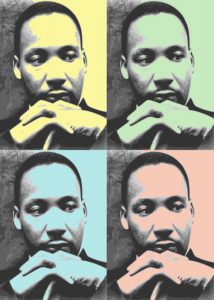 Throughout the boycott, Dr. King was arrested, his home bombed, and he was subjected to personal abuse.  Drawing on his Christian ideals and studying Gandhi’s nonviolent movement in India, Dr. King taught the nation to pursue justice, courageously, with principles centered on service and love.

Over the next eleven years, Dr. King was committed to peacefully – yet relentlessly – driving the change he wanted to see in the world.

He traveled over six million miles – and certainly not with today’s air and automobile comfort standards. Hotels often barred him from booking a room.

Again, he did not rise up in anger, nor back down from his resolve.

Instead, Dr. King put service before self, speaking over twenty-five hundred times and appearing wherever there was injustice, protest, and action. He caught the attention of the entire world as he directed the peaceful march of 250,000 people on Washington, D.C in 1963.  Standing on the steps of the Lincoln Memorial, he delivered his famous address, “l Have a Dream.”

Now, nearly 58 years later, Dr. King’s words calling for peace and justice need to serve as a bridge for healing our nation.

“There is something that I must say to my people who stand on the warm threshold which leads into the palace of justice. In the process of gaining our rightful place, we must not be guilty of wrongful deeds. Let us not seek to satisfy our thirst for freedom by drinking from the cup of bitterness and hatred.”

His words and his process were brilliant, and transformational.  It is a shame that today’s leaders and media voices seem to have learned little from Dr. King’s methods.

Dr. King’s vision and belief was that all human beings have the potential for greatness, which can be gained in serving someone else.  On January 18, our nation will commemorate the 26th anniversary of the day of service that celebrates the Civil Rights leader’s life and legacy.  MLK Day is the only federal holiday designated as a national day of service to encourage all Americans to volunteer to improve their communities.

As a leader of a company committed to driving a high-performing, inclusive people-first culture that celebrates the unique and important contributions of all our associates, we will commemorate MLK Day as a paid holiday.

Many of our frontline essential retail and distribution center associates will commemorate the day of service while ensuring our communities have the necessary food, medicine and products they need.

For others, the day will be spent in service to their local community or learning or teaching others about Dr. King’s passion for service.

We can all take a cue from the King family by teaching our children about the power of family, faith and service.  In doing so, we may take a step closer to ensuring that future generations are not judged by the color of their skin but by the content of their character.

Dr. King left us with invaluable lessons of peaceful service in the pursuit of justice.  Our “day on” during his birthday week – and collective commitment to volunteer throughout the year — is our small effort to honor that legacy.