With your final grades posted today, it’s official. You are a college graduate! As our oldest child, the events of your life represent important “firsts” for your mom and me. This graduation is one such life event.

This week was supposed to be graduation week. I looked forward to seeing you march in the line of victors to the always emotive Pomp and Circumstance. During these last few years, we fretted about a great many things that could potentially get in the way of graduation. Never in a million minutes would I have contemplated that the event itself would be canceled, globally, on account of a virus.

The coronavirus has caused much pain, and most of it more significant than the cancellation of a celebratory event. At the risk of sounding immature, I am still angered and saddened by this next insult. Sure, the wound is worse, but the salt that follows is still pain anew. After all, this graduation is also a rite of passage for parents. For me it is not about validation. It is simply one of those moments that is definitive and worth basking in. I changed your diapers, but I don’t actually recall when I changed your last diaper. I loved coaching your sports teams, but I don’t even know when you fouled off your last pitch or served your last volleyball. Like most well-adjusted adults, I didn’t really care if you went to the prom. But I did care, deeply, about you finishing this mission and the event that would mark that achievement was a definitive graduation ceremony.

But rather than simply lament the loss of my next one-moment-in-time, I will instead do a commencement speech … for you. Because I know you would prefer for me not to get too mushy, I will save that for later.

First and foremost, congratulations to you and to the class of 2020! 2020 will certainly be remembered as a class with “vision” (pause for polite chuckle at obligatory Dad-joke).

It is common during the advent of commencement to reflect on how far one has come during college years. Every grad and their families must look at this time in sheer wonder. When you started college, I remember the apprehension of moving away and not being able to rely on important family support at arm’s reach. There was also the challenge of rearranging living circumstances with obnoxious young people. And that was just stuff your mom and I were dealing with! Well, we all got through these years of transition, and you have blossomed and grown in ways I could hardly imagine just a few short years ago.

Speaking of transition, here we are again! Graduation in any era is both exciting and anxiety-provoking. You will enter the workforce and start a career. Like some of your peers, you are pondering grad school, and like all of your peers, you are thinking about all the other hopes and fears commonly filling the minds of grads everywhere. It is perhaps the most energizing time in one’s life.

I recall so vividly my own emotions at this critical juncture. I was thrilled to be done with one phase of life and moving on to the next. I was offered the opportunity to start my career as an “associate engineer” in a new Frito-Lay manufacturing plant in Casa Grande, Arizona. I had nervous energy about being an independent adult and was ready to learn about life as a single successful guy. I had dreams and ambitions that seemed boundless, and I was blissfully ignorant of the many challenges that would pose obstacles to those dreams.

I learned along the way not to worry about what I could not control, and I discovered the great gifts I had that were totally in my control.

I had faith in God’s love and chose to see that love even among the trials of difficult times.
I chose to work hard, be dependable and do what I said I would do.
I chose to be optimistic and to persist even when things didn’t seem to go my way.
I chose to take responsibility and to remember to say thank you.
I chose to love people and to serve those around me.

These choices were small things. They were free. And I think these choices made a difference for me.

For one of my college classes, I read the book On Becoming A Leader by Warren Bennis. The book discussed the importance of continuously learning about the world around you. It discussed at length the importance of understanding your strengths, weaknesses, desires, etc. It presented the notion that a person can be a terrific leader if she is aware of the world around her, aware of her capabilities and is willing to pursue with infectious energy the things that matter to her. Thus, leadership is about choosing. I confined my summary of what I learned in that book to eight words:

Know yourself.
Know the world.
Act on instinct.

I got a B. Not bad for eight words.

Don’t sweat stuff that’s not in your control.
Know yourself and make simple choices to optimize your outcomes.
Continuously study and know the world in which you find yourself.
Act … with zeal … on instinct.

And that leads us to the world you are now entering. It may seem a little darker than it did just three months ago. Many of the economic threats posed by the COVID-19 pandemic are drawing comparisons to the Great Depression, so a few words on that era might be useful.

While the Great Depression was a time of tremendous suffering, it was also a time of paradoxical hope. Your grandparents were all children of the Great Depression and carry with them traits from those formative years. They are a little more frugal and a little more hard-working than generations that followed. Curiously, the great many people I know who grew up in that economic trough are among the most optimistic and settled people I have ever known. It is as if that time of strife forged character and capability that our more recent era of relative ease could not.

And what did the “graduates” in the Great Depression do? It might be easy to imagine a generation hunkering down to wait for better times. Precisely the opposite. They were builders. Among their most iconic building achievements are the Hoover Dam, the Empire State Building, the Golden Gate Bridge, Mount Rushmore and countless others. Great companies started up. Walt Disney started his company on the eve of the Great Depression. Bill Hewlett and David Packard graduated in 1935 and started their eponymous company in 1939. (David’s wife Lucille provided the endowment that built the children’s hospital you were born in 58 years later.) And two gentlemen, Elmer Doolin and Herman Lay, started the Frito Company and H.W. Lay Company that eventually merged and provided me 20 years of opportunity when I graduated in 1985.

Nothing was easy for the graduates of the Great Depression. They faced the most difficult economic problems of the modern human era and persevered. They were also called upon, as that difficult decade ended, to put an end to fascism and hatred worldwide. This generation of Americans accomplished much perhaps because they were forged in the furnace of the Great Depression and not in spite of it. They are known to this day as the Greatest Generation.

President Woodrow Wilson once said that every graduate sent out from a university should be a man of his nation as well as a man of his time. As a nation, as a society, we count on young leaders to take up the mantle of their times. These are your times, your nation. You are being called upon to take the knowledge you have of yourself, the knowledge you will acquire of your world and to act instinctively to make the world a wee bit better.

What is left of my time is to bask in this celebration, in the solemn pride to know I have played a small role in the gift you will be to this world. This is … your time.

No commencement speech is complete without a quote from Dr. Seuss (who published his first book during the Great Depression):

You’re off to Great Places! Today is your day. Your mountain is waiting.
So … get on your way! 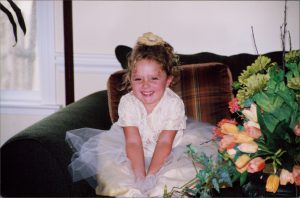 Insights and opinions from Tony Sarsam, CEO of the Borden Dairy Company.